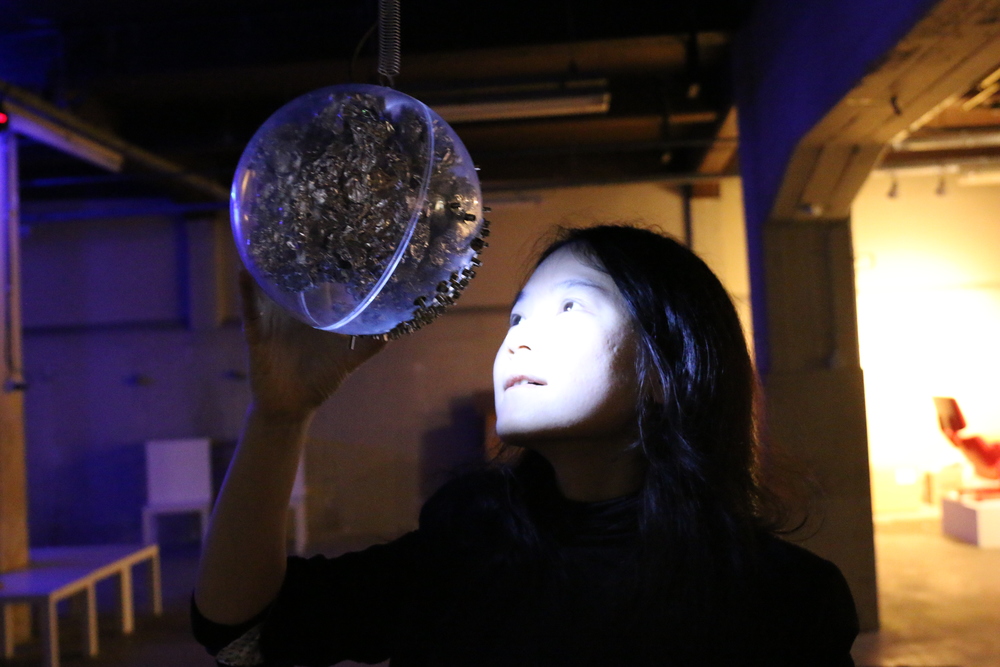 The main part of REPLICATION is built with over 80 IKEA tables. The tables, and repetition of using such tables – an icon of economic scale and expansion – are considered as an artistic expression to symbolically represent “replication”. In addition to this comparatively large-scale physical sculpture, video images captured by the camera in the ball are projected onto the selected table surfaces. These projections are shown with a delay so the participant and the spectators both could see the expression making its way through projection surfaces one by one. The movements with small changes and efforts resulted in a progressively bland, colorless, and disintegrating image. The experience in this artwork is built on the forms of physical sculpture and interactivity in which both forms serve as a means to allow the audience to access the content.

The initial iteration of REPLICATION was made by Emilija Marinkovic, Jiali Tang, Xiaoyun Zhang, and Yuyuan Zhou as one of the nine results of the international workshop (Taicang, China) in which I was involved as a coach and workshop organizer. The second version of REPLICATION was adapted and developed for the Dutch Design Week 2014 by professors, researchers, and students at the Department of Industrial Design of TU/e (Eindhoven, the Netherlands) in which I was involved as an artist and a project leader. The second version of REPLICATION was coordinated and facilitated by Dr. Jun Hu and Dr. Mathias Funk. Concept development and design were by me, Emilija Marinkovic, and Swayon Leung. Implementation was a team effort of me, Dr. Mathias Funk, Lucian Reindl, and students Emilija Marinkovic, Swayon Leung with help from Marin Sikkenk and Anouk van Ranst.

Exhibition view. REPLICATION was at Dutch Design Week 2014 (Eindhoven, the Netherlands) in 2014 and exhibited in 1st “In the front” Digital Media Summit Forum (Nanjing, China) in 2016. Related link:https://research.tue.nl/en/publications/replication and http://desis.id.tue.nl/replication/